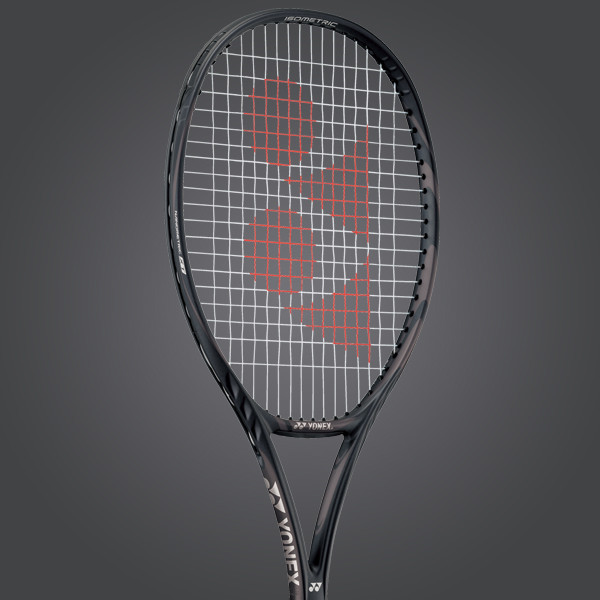 The Yonex VCORE 98 offers the most power and comfort for club players in the VCORE series, thanks to the 305g weight and 16x19 string pattern for added spin and improved manoeuvrability, stability and comfort.

Welcome to the new shape of spin. Yonex VCORE takes the very latest in Yonex's innovative technology and combines it with a new type of tennis racket that gives you easier access to spin than ever before.

The new VCORE range is Yonex's most powerful range of tennis rackets, offering more spin and power than the EZONE thanks to a slightly stiffer frame while also maintaining a power advantage over the VCORE PRO series, and focuses on allowing you to rapidly move from defence to attack by letting you hit penetrating, high-trajectory spin balls when needed.

The new 2018 VCORE has a softer feel than the previous VCORE SV range, giving you more feel and comfort while improving upon power and spin thanks to Yonex's new technologies. There are four key improvements over the previous SV range: Aero Trench, Liner Tech, Enhanced Aero Fin and Namd.

Aero Trench - An innovative new design that reduces air resistance by shielding the grommets at the top of the frame for faster swing speeds, resulting in a more aerodynamic racket and easier manoeuvrability for players.

Liner Tech - Newly engineered straight hole grommets allow for more string movement on the outer areas of the racket to increase spin, resulting in increased ball-pocketing and more contact time between the ball and the string bed.

Namd - A revolutionary next-gen graphite, Namd allows you to grip the ball and fire off aggressive, attacking spin thanks to Namd's unique flex and fast frame snap-back, resulting in increased spin and a more flexible, plusher-feeling frame.